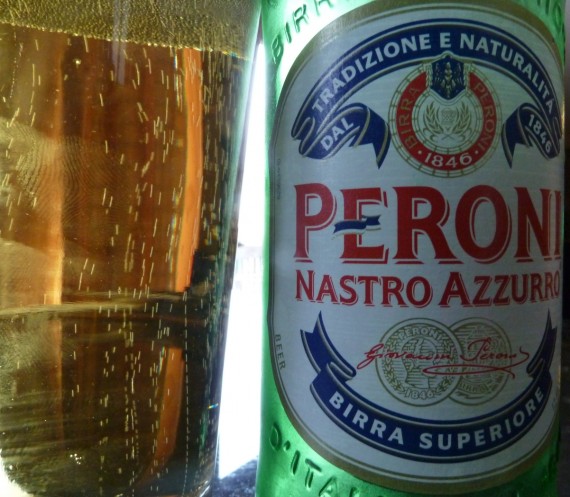 When I say Italy, what is the first thing that comes to mind?  Art, architecture, wine, Ferraris, hairy men that talk with their hands (I’m kidding…sorta)?  Where does beer fall on that list?  Pretty far down, right?  Why so many questions, will there be a quiz later?  Yes, yes there will.

Peroni is Italy’s number 1 brewery, although that’s kind of like saying that the fish sandwich is the healthiest thing at McDonald’s.  The brewery was started in Vigevano, Italy by Francesco Peroni in 1846 although it moved to Rome in 1864.  To avoid being a completely stereotypical Italian, Francesco broke away from the family business of making pasta to follow his dream (which I hope was to make a mediocre beer because if it was…success).

Now owned by British brewing giant SABMiller, Peroni is not only Italy’s number one beer, it is actually known around the world.  Peroni is, in fact, the official beer of Fashion Week in New York, Los Angeles, and Miami (whatever the hell that means).

The best known beer brewed by Peroni (at least in the US) is Nastro Azzuro, which means Blue Ribbon.  This light, pilsner-style lager is named Blue Ribbon, not because it ever won an award, but because it was named in honor of the Italian ocean liner SS Rex.  You see, the SS Rex is the only Italian liner to have won the Blue Riband, an unofficial award for the passenger liner that crosses the Atlantic the fastest.  I don’t even know what to do with that information.

So…the beer (this is going to get ugly).  To me, even the color of this beer is bland.  The smell is that of a beer that I accidentally left on my deck for the entire month of August (and yes, I know what that smells like).  Luckily, it tastes better than it looks or smells, it is actually drinkable.  By drinkable, I mean it is a liquid that can be consumed.  Enjoying said consumption however, is not likely.  It is not a particularly flavorful beer, but it is not smooth either.  It has a bite that leaves a bad aftertaste in my mouth that tastes like a mixture of bitterness, sourness, bubbles, and sadness that I bought this beer.

Peroni Nastro Azzuro is available in Walt Disney World, but not where you would think.  It is found at the ESPN Club and at Portobello’s, but not in the Italy pavilion in Epcot.  Since I don’t generally visit either the ESPN Club or Portobello’s, I approve of this decision.