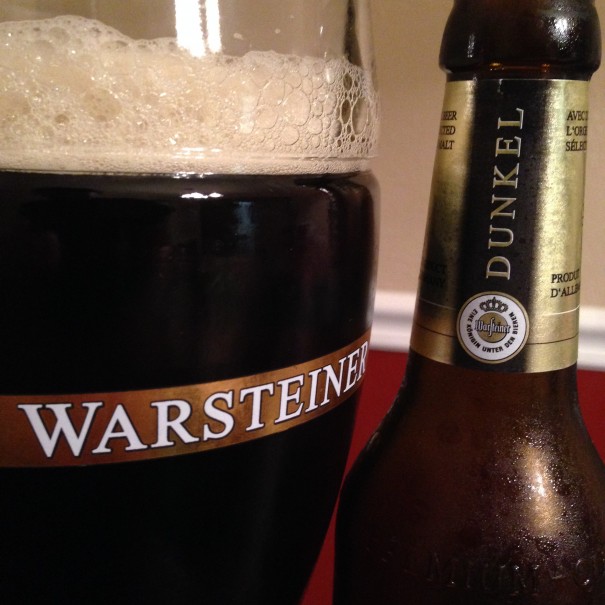 The 2013 Epcot International Food and Wine Festival starts this Friday, September 27! This week we’ll bring you some beer reviews to some of the Food and Wine beers.

A while ago the Flying Saucer in downtown Houston had a special event with Warsteiner. I believe the beer being served was the Premium Verum instead of the Premium Dunkel I’ll be reviewing here, but if you bought a liter of Warsteiner you kept the special Warsteiner glass it was served in.

This particular boot is designed to hold a liter of beer and still have room for a nice head. Three bottles of Warsteiner Dunkel was just enough to fill this boot properly.

The history behind the glass boot is a bit unclear, but BeerFestBoots.com offers this explanation.

Beer boots or ‘Bierstiefeln’ in German have over a century of history and culture behind them. It is commonly believed that a Prussian general promised his troops to drink beer from his boot if they were successful in battle. When the troops prevailed, the general had a glass maker fashion a boot from glass to fulfill his promise without tasting his own feet and to avoid spoiling the beer in his leather boot. Another tradition holds that during the first World War German soldiers began passing around a leather boot filled with beer, as they were lacking glasses. It became a symbol for good luck, as the soldiers would flick the boot before drinking it for good luck, and flick it again after drinking to wish the next soldier good luck.

A boot can be tricky to drink out of. If you have it turned with the toe pointed down, air can rush into the toe and push the beer out quicker than expected. It’s a quick way to get splashed in the face with your own beer.

As for the Warsteiner Dunkel itself, it’s a dark brown beer with amber highlights. Large tan head (which may partially be a result of the boot). Bready aroma with hints of caramel sweetness. Flavor is full of bread but also has a bit of roasted malt. It’s not going to blow your mind by any means but it’s a good sessionable beer. Body is light and the carbonation is light to medium.

Warsteiner Premium Dunkel will be served at the Brewer’s Collection booth at the 2013 Epcot Food and Wine Festival. Personally, I’d suggest grabbing this one as part of the associated beer flight and see if it’s one you want to have more of. It’s easy to drink and fairly good, but with eight beers at this booth alone I’d suggest trying the flights before committing to a full glass of one.