On Saturday, June 9, 2012, the second annual Houston Beer Fest was held in downtown Houston. I couldn’t make it the first year (Lindsay and Jackie tried to go, more on that in a minute), but this year my schedule was wide open and I was outside of City Hall drinking lots of delicious beer. 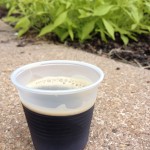 First, let’s briefly go over what happened last year (as recounted to me by Lindsay and Jackie). It was a hot day, as most days in June are for Houston. Not long before the festival, the organizers released a Groupon for discount admission. They sold more Groupons for the event than they could handle (and actually oversold the event), and the one entrance to the festival was overwhelmed. If you ever made it inside, it was still extremely hot, the lines were long, and the cups and beer ran short. This year was much more organized and the day was quite pleasant. 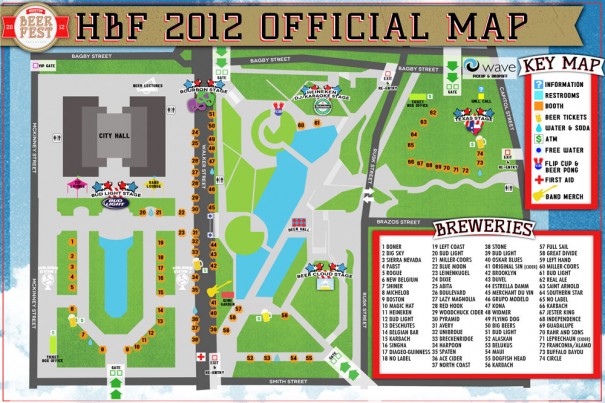 I arrived around 11:30 AM, just 30 minutes after the festival started. I walked up to the nearest gate, showed my ticket and my ID, got a wristband, cup, map, and beer tickets, and walked right in. I wandered around among the light crowds, getting the lay of the land. The festival spanned about two and a half blocks downtown; Walker Street, as seen on the map above, was barricaded off for the block of the festival; there was tunnel access to the third section where the Texas beers were headquartered.

There were actually three gates to enter through; I never saw a long line at any of the gates. Entrance tickets had a hard limit of 13,000 so the event wasn’t oversold. As far as I could tell everyone there was having a great time.

The first beer I tried was the Houston Beer Fest 2012 festival beer, a blonde ale by No Label of Katy, TX. Nothing fancy, but it was good and certainly something that would be refreshing on a hot Houston day.

One of the featured areas for 2012 was the north end of Walker Street, which was the “Destination Passport” area. This area was devoted to New Orleans, and since it just so happens that I’m from New Orleans, I feel especially able to comment. Here’s the extent of their food and beverages: Abita beer, Dixie beer (which surprised me), and shrimp poboys from BB’s Café. BB’s makes some good poboys, but they’re a Houston company. So despite this being a feature of the festival, only beer from two breweries and a Houston restaurant was available. No gumbo, no etouffee, no crawfish, nothing except for those three. Lazy Magnolia was also nearby, but they’re from Mississippi. Did the organizers talk to NOLA Brewing? How about Covington Brewhouse? This “destination” felt like it was put together in about ten minutes. I still had an Abita Andygator and a poboy, but come on. And yes, I’m a New Orleans snob; don’t get me started on how Houston restaurants don’t know how to boil crawfish.

Overall though it was a great day! I got to try a lot of different beers, including:

To be honest, there wasn’t a bad beer among the bunch I tried. Karbach’s Barn Burner Saison and Real Ale’s Phoenixx were two of my favorites though.

In typical Texas fashion, they also had a booth where they were frying candy and such. I had to try the fried Oreos: 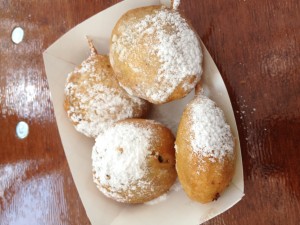 They were quite good; sort of like an Oreo stuffed into a beignet.

One other thing I found strange was that the stages were covered in Budweiser and Bud Light ads. There were also multiple Budweiser and Miller booths. I guess they can afford it, but the message having those stages covered in Bud ads contradicted the spirit of the festival.

If you’re in town in June next year, see if you can get a ticket to the Houston Beer Fest. It’s worth your time to try all kinds of different beer from Texas and elsewhere.