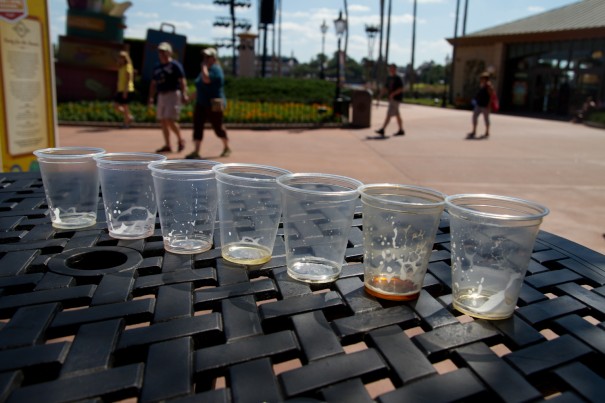 After trying all the beers at Food and Wine, your table may look something like this.

The menus are out and the Epcot International Food and Wine Festival Beer List is updated (along with a brand new app). Let’s chat about what’s on the list. Last year I wrote a huge article detailing every beer at every location. This year I’m going to cut it down a bit and talk about the changes; a lot of the beers, especially at booths like Mexico and China, have the same exact boring selection.

Hops and Barley is still the home of Samuel Adams, but Angry Orchard is also making an appearance this year. Blackberry Witbier was removed in order to make room for the hard cider. The Festival Beer this year is Samuel Adams Chocolate Bock, replacing last year’s Boston Ale. Samuel Adams Octoberfest isn’t specifically listed this year; the ever so vague Samuel Adams Seasonal is listed instead. However, Octoberfest is the fall seasonal and should be there.

Canada is not listing any Unibroue beers at their booth; however, last year Disney brought three out of Le Cellier to serve during the festival. They may show up at random, so keep an eye out.

Hawai’i is still serving Kona beers, but they replaced Longboard with Kona Big Wave Golden Ale. Pipeline Porter will also be available at the booth.

Last but certainly not least, the Craft Beer Collection has a few changes to its selection. Instead of Blue Moon, a Blue Moon Seasonal will be available. Florida Beer Company makes another appearance here with Devil’s Triangle, an IPA that seems to be brand new! Widmer is sending over one of their Rotator IPAs, a Spiced IPA, instead of their Hefeweizen. Craft Beer Collection will have three IPAs this year (Full Sail IPA is the third), as opposed to only one last year. Along with Sierra Nevada Pale Ale, the booth has a much hoppier selection.