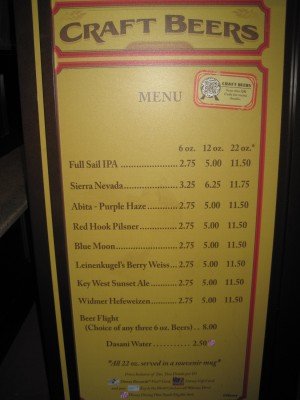 Now that we’ve had some time for the 2012 Epcot Food and Wine Festival menu to settle in, let’s take a closer look at the Craft Beer Collection booth. It’s a decent selection, but with some changes in the lineup it could be easily improved. Here’s what is being served:

Let’s start right off with Abita’s Purple Haze. One of the three most common beers in Abita’s lineup and served at the Port Orleans resorts as well as Raglan Road and ESPN Club. I can make this substitution simple; just order Abita’s best brew (in my opinion): Andygator.

Blue Moon’s seasonal will probably be Harvest Pumpkin Ale, but Disney isn’t committing to it. Personally, pumpkin ales are one of my favorite styles. Taking that into consideration, who can brew a pumpkin ale with enough volume to serve at Food and Wine? Could Cigar City brew enough Good Gourd Imperial Pumpkin Ale? Would Dogfish Head be able to provide enough Punkin Ale? Honestly, I’m not sure, but I think Good Gourd would be a great substitution if it could be pulled off.

Keep Devil’s Triangle; I like that it’s a brand new beer from Florida Beer. It is, however, one of three IPAs out of eight beers. I’d cut Full Sail IPA and replace it with a different style. How about something dark? Left Hand Milk Stout Nitro would fit the bill here.

Leinenkugel’s Berry Weiss was panned by Jenn and Patrick last year; they referred to it as carbonated Hawaiian Punch. The original lineup (assuming Blue Moon’s seasonal is Harvest Pumpkin Ale) also contains three fruit beers. I’d get away from the fruit beer entirely and tap some Stone Arrogant Bastard instead.

I haven’t had Red Hook Pilsner but Jenn and Patrick called it nothing special after tasting it at last year’s Food and Wine Festival. Instead, serve Lagunitas Pils. It’s definitely one of the more interesting pilsners I’ve had.

Sierra Nevada Pale Ale won our Walt Disney World Beer Tournament earlier this year, but I can’t help but think that it’s already served all around the resort. With Kona Fire Rock Pale Ale not being served at the Hawaii booth, I see no reason why it can’t be served here.

Finally, I’d keep Widmer’s Spiced IPA. I haven’t had it before and would be interested in trying it.

For those of you that glossed over the article, here’s my Craft Beer Collection list:

To me that’s a much better list and one that could truly be called a Craft Beer Collection.