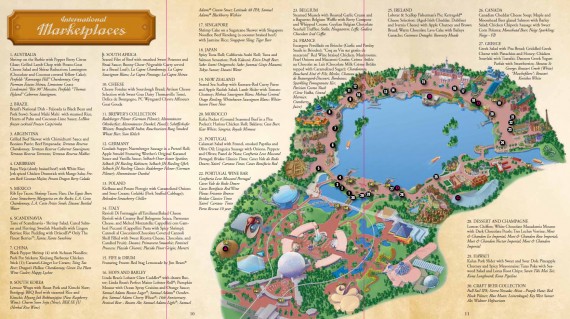 Why would a site about beer and Walt Disney World have an article on the Epcot International Food and Wine Festival? Despite the name (I guess Food and Beverage Festival or Food and Alcohol Festival wasn’t as catchy), many of the Food and Wine booths around World Showcase Lagoon serve beer! The 2011 map just came out; let’s take a look!

We’ll go in the same order the map does, in a clockwise direction from the entrance to World Showcase from Future World. If a booth doesn’t have beer, it won’t be mentioned here. If a beer is linked, it’s on our Walt Disney World Beer List, which also means it’s a beer normally served somewhere on property. The link will take you to its page on our list.

The Mexico booth, #5 on the map, is the first location serving beer. Unfortunately, only Dos Equis is served at the booth, and that can already be found throughout the Mexico pavilion.

Continuing with the lackluster selection in the first few booths, the China booth (#7) is serving Tsing Tao, also widely available in the China pavilion.

The first gem of the festival can be found at booth #11, the Brewer’s Collection. Located just outside the Germany pavilion, this booth is serving a variety of beers including:

The four beers of Biergarten and the Germany pavilion will be served, but four more have been added just for the festival! With all this German beer, who could resist just camping out here and trying all the different ones?

The Italy booth, #14, lets us down in selection again, however. The only beer here is Moretti, a staple of the Italy pavilion.

The second beer haven is on the west side of The American Adventure. #16, Hops and Barley, is the Samuel Adams base. The following will be served at Hops and Barley:

Sam Adams has set up a decent variety here. This is another good place to camp out and have a variety of beer styles, even though they’re all from Sam Adams.

Singapore, booth #17, has only one beer. It’s not one normally seen in Walt Disney World, however, and it’s called Tiger Beer. The name alone makes me want to try it. Rawr.

#18 on the map is the Japan booth, and it’s another booth whose beer selection comes from the beer normally served in the pavilion. Kirin Ichiban will be on draft in front of the Torii Gate.

Morocco’s booth, #20, is serving Casa Beer. No surprise here as it’s the only Moroccan beer served in the pavilion.

Belgium (#23) has a usual selection as well as an interesting selection. It’s no surprise that Stella Artois is making an appearance here, but the map also lists “Hoegaarten”. I believe this is simply a typo and Disney means Hoegaarden. Hoegaarden is a brand owned by InBev and there are multiple Hoegaarden beers; if I had to guess, Hoegaarden Original White Ale will be served here.

Booth #25, looking a bit lonely between the United Kingdom and Canada pavilions, is Ireland. Naturally, the black gold of the Irish, Guinness Draught, will be served here. However, Guinness can be found just down the promenade at the Rose and Crown, so it’s really just one more place to have a Guinness.

Oh, Canada. (sigh) Your booth, #26 on the map, could be a mecca of fine beer. Instead, it’s just another booth of beer mediocrity as Moosehead is the only beer found at the booth. It’s a shame that even for this special event Disney refuses to release any of the six Unibroue beers from their confines in Le Cellier.

Hawai’i, the second to last booth (#29), is offering two beers from the Kona Brewing Company located on the big island. Kona Longboard, a popular beer at Walt Disney World, and Kona Pipeline, a porter, are being served at this booth.

#30 on the map but perhaps #1 in our hearts is a booth called the Craft Beer Collection. Eight American craft beers (for the sake of this already lengthy article, I’ll leave the discussion of whether all of these are considered craft beers for another time) are featured at this booth located right at the entrance to World Showcase from Future World.

The Craft Beer Collection has a fairly nice variety from some of the larger craft brewers in the country. This is another good place to try a variety of styles all at one booth.

Almost half (14) of the booths at Epcot Food and Wine Festival are serving beer. Could the selection be better? In some places (Canada), yes. Even if you just visit the three main beer booths, that’s 24 different beers to choose from! Despite the name, visiting Epcot during Food and Wine is a good way to try many different beers (36 if you’re determined to try them all), even ones that aren’t normally found at Walt Disney World. Cheers!