If you haven’t checked out the craft beer selection in the Italy pavilion lately, you are really missing out on some great new offerings.  Wait…craft beer?  In the Italy Pavilion?  Yes, you heard us right!  While down in Disney World for the Food & Wine festival, we were able to get an overview of the Italy beer program from Eric Bandauski. Eric works for the Patina group (who runs all of the Italy restaurants) and is directing the beer program in the pavilion. The Italy pavilion beer program was started about 6 months ago and is starting to grow and improve every day.

While the beer selection can’t compete in quantity with the roughly 280 bottles of wine at Tutto Gusto, they’re hoping that the 6 unique drafts will gain a following and make us beer aficionados happy (the current offering of Bud on tap will hopefully end soon to allow room for some more good stuff, cross your fingers!).  Trying to keep the quality to a high standard, all of the craft beers served at the pavilion are either 4 or 5 star rated.  The goal is to purchase award winning beers from small producers instead of constantly going to the trusted beer giants that everyone knows.  And all of you Moretti fans, don’t fret!  In addition to the craft beers, you can always find Moretti brews at all 3 restaurants.

Most people don’t think of beer when they think of Italy and Eric is trying to change that.  Most Italian craft breweries only started after 1996 and they haven’t been exporting much until recently. There are currently 75 craft breweries in Italy with 25 more opening soon.  Most of the breweries are in the Tuscany region and create ales that follow Belgian style brewing, with a little English and German influence.  In Italy, wine is definitely king so the breweries need to compete with the wine drinkers.  Because of this, you’ll notice that many breweries offer 750mL bottles of their brews.

Despite the limited supply of Italian beer to the United States, the pavilion is planning on constantly rotating the drafts and bottles at all of the restaurants.  Since the supply of available craft beer is small, the rotation can be swapped out after as few as 10-12 kegs.

The pavilion has unofficially partnered with Amiata brewery (http://www.birra-amiata.it) to bring their unique selection of beers to the World.  Amiata brewery is run by the Cerullo brothers in a tiny brewery in Arcidosso near Monte Amiata amidst chestnut forests and vineyards. Perfect setting to create amazing beer, right?  The brothers produce Belgian-influenced beers spiced with local ingredients such as chestnuts, honey and saffron.  Gusto is currently the only establishment in the United States to offer Contessa on draft (you can find it in bottles in a select few areas, as well as Via Napoli).  As the seasons change, various beer offerings from Amiata will rotate in and out.  Just put on tap for the winter season is a chestnut ale, Birra Amiata Bastarda Rossa, which we look forward to trying in January!  Looking at Amiata’s site, there are 14 offerings that they create, each one sounding better than the last.

Italians create beer to eat with while their American counterparts create beer to drink with, hence why many of the Italian crafts pair so well with food.  There are discussions of having beer and food pairings in the new year in the Pavilion, so cross your fingers that it’s sooner rather than later.  We were able to try a coffee porter with an award winning hazelnut cake that was seriously amazing.  The cake was delicious on it’s own, as was the beer, but when paired together, they complimented each other really well.  (Looking at the current Italy beer list that was just sent to us, it looks like the coffee porter is officially on the menu!)  Another great pairing was the the cured Italian meat sampler (the Affettati), with all of the beers we sampled. 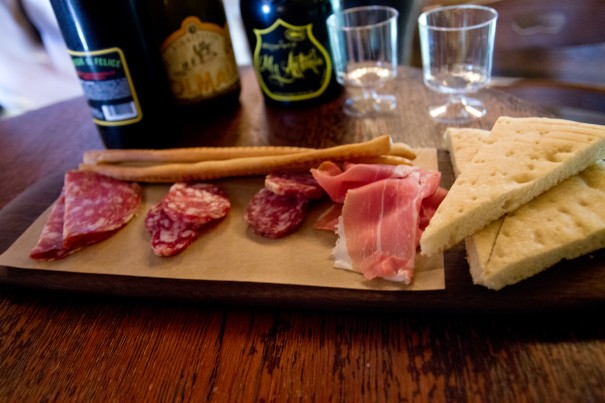 The beer offerings are unique for each of the restaurants in the pavilion. In Tutto Gusto, there are four beers on draft and the selection varies throughout the year. While we were visting, there was Tipo Pils, Contessa, and Lenova available and also Bud Light.

We were able to try the following:

In Via Napoli, there’s a great bottle program that easily bumped this restaurant up on my list of favorites.  At the time of our visit, there were four beers: Amiata Contessa, Strada San Felice, La Cinque, and My Antonia. (The offerings have slightly changed to include the winter brews discussed below.)  The bottles are all 36 oz servings, so you’ll want to have a few friends with you when you try it out. We were able to try the Strada San Felice which was a great beer that went really well with the Arancini. As mentioned earlier, all of the beers offered in the Italy pavilion pair well with food. All of the servers are educated on the beer offerenings, so feel free to ask what beer would pair well with your meal. You won’t be disappointed. 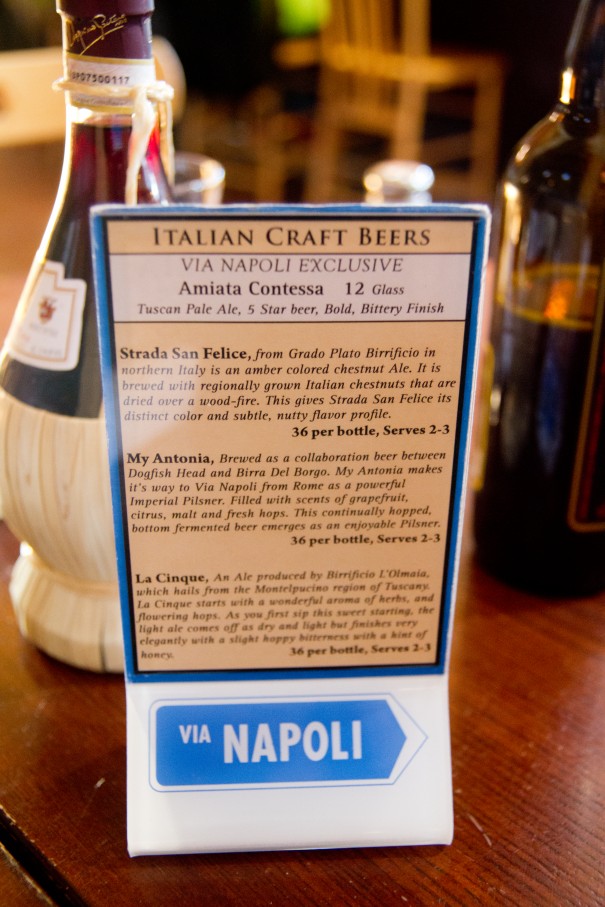 Coming for the winter months, there are a few unique Christmas brews that looked and sounded amazing.  We weren’t able to try them (we were still working on the Strada San Felice and there’s only so much beer that the two roving reporters could drink in one sitting!) but Eric brought out the bottles for us to take a look. How cute is the individually wrapped Birrificio Montegioco Runa Bianca? It’s like your own personalized Christmas gift!  The Noel Baladin also looked delicious, and we’re sure they all pair amazingly with the Coppa di Brutti Ma Buoni. If you guys haven’t had that dessert, run there now and order it.  We are still talking about those marinated cherries! 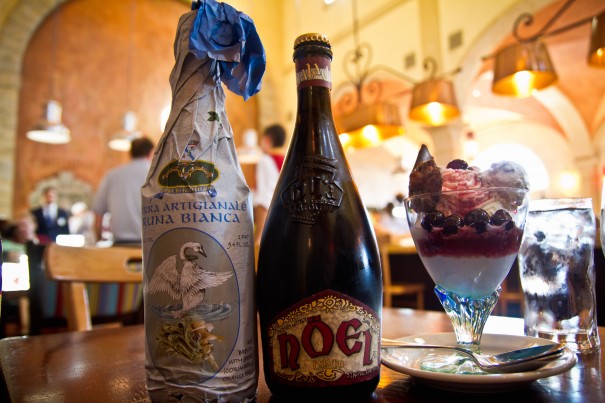 Also teased by Eric was the addition of a Italian beer cart somewhere in the pavilion, much like the Norway and Germany ones currently in their respective pavilions around World Showcase.  Again, details are still trying to be worked out but it sounded promising.  For next year’s Food & Wine festival, also look for special offerings and additional craft beer and food pairings like the Via Napoli ones from the past few years.  They’re looking to bring in the brewers and offer other beers not available anywhere else. 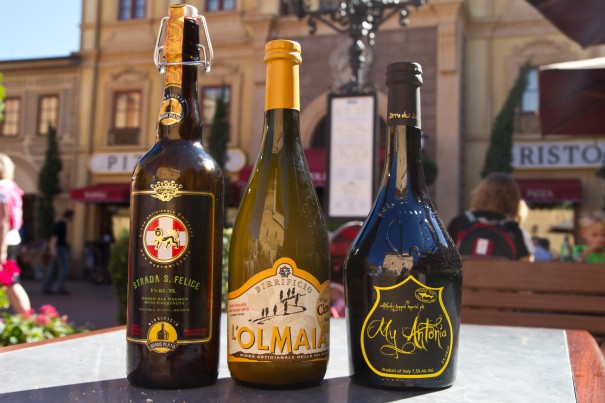 Coming in the new year is also going to be a new partnership with the Bruton brewery so look forward to those on the menu soon!  Based out of Lucca, Italy, Bruton is crafted all naturally and undergo a re-fermentation in the bottle that enhances their character, complexity and ability to improve over time.  Extremely limited, their site says that everything is handcrafted one bottle at a time!

Eric’s passion for the Italy beer program easily shone through when we were talking with him. For all of us beer lovers, it’s amazing to finally see parts of Disney stepping up their game and offering us something unique. While we understand that Disney still needs to cater to the masses, we discussed that beer tastes are changing in the States, for the better. With the beer education amongst guests improving, this seems like the perfect time to introduce some of these unique offerings at the World. When asked what Eric would consider a successful program, Eric stressed that they want to offer customers something that they do not or would not normally have access to. The goal is for guests to enjoy and appreciate what the staff and Italian culture has to offer, whether it’s food, wine, or the up and coming craft beer culture.

Thank you, Eric, for a great experience in the Italy pavilion and for allowing us to share it with our readers! Looking forward to all of the new and exciting changes in Italy and we hope this idea spreads like wildfire amongst the other pavilions.

If anyone has any questions and/or comments about the program, feel free to leave them here and we’ll try to get answers as soon as possible. 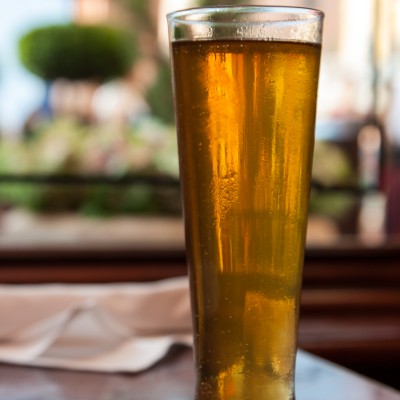 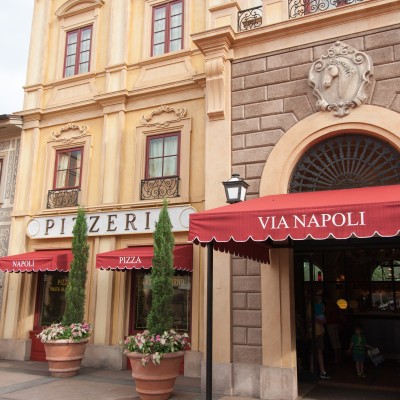